Using technology to read and write 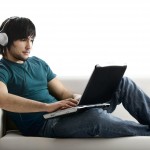 Speak to Spell. If the word can be spoken, it can be written.

Speak to Spell is a concept I developed when it became clear that speech recognition software was having an enormous impact on people who had previously struggled to type or write by hand, or who wanted independence from relying on a secretary/typist. Speech recognition software (i.e. speaking via a microphone to the computer to create text) does not make spelling mistakes, although it may make some voice recognition errors. Speaking Solutions has been involved with Dragon and other speech recognition products since they were introduced to New Zealand in 1994. The power and impact of these products has grown over time as both the hardware and software have been developed.

The focus of Speak to Spell is on building spelling confidence and word awareness using the power of ‘discrete’ speech recognition software (programmes that convert speech into text one word at a time). Confidence in spelling generates confidence in writing and, for many children, confidence overall.

With discrete speech, a user thinks of a word and says it to the computer. The computer then has a ‘best guess’ at what the word is (this is the voice recognition component), which will usually appear at the top of a list of words on the screen. This process matches the method of learning to spell by speaking, seeing and confirming a word. Because there is only the spoken word and then the written word on the screen, there are none of the usual barriers to interfere with the focus on spelling, such as ‘How do I spell this’ or ‘How do I form/type this letter’.

We have noticed that students become very involved with words and take more responsibility for their own learning. They begin to use two hands on the keyboard and often choose to copy an earlier word from their text rather than speaking it again. Some students want to speak and select every word, while others will only use the software for the occasional word.

Discrete speech software focuses on one word at a time, which is often the way that students work when they are beginning to learn to write. Pattie King deBaun, a speech and language pathologist, points out that children typically learn to write before they learn to read. However, they know the spoken words and can learn to read by saying them out loud and seeing them appear as text on the screen. Older children also become liberated. They are able to use the whole of their vocabulary, rather than just the words they know that they can spell.

Pronunciation of the spoken word varies with accent and exposure to language. For example, these days we mostly don’t speak with BBC-style pronunciation and clarity of speech (articulation). English is the world’s universal language and yet it is possible for people to not understand each other with ease even when they both say they are speaking English. However, the same group of words when written down would be understood by both parties.

Speaking and listening are natural behaviours which usually develop as children grow, as long as they are exposed to spoken language; by contrast, reading and writing are skills which must be painstakingly learned. Oral literacy is ancient, while literacy in reading and writing is a comparatively new skill and certainly not universal.

Since 1994, when we first started working with Dragon software, we have observed the confidence that discrete speech software can give to people who, for whatever reason, cannot write and maybe cannot spell. With the use of such software they can both write and spell by using their voices.

Barriers to writing and spelling range from not making the connection between the spoken and written forms of a word, to being unable to form a letter or find it on a keyboard. On many occasions we find that a light goes on with users who have been trying to write phonetically when they say a word such as ‘photograph’ and then see the word on the screen. They suddenly realise that in some words, the ‘f’ sound is written as ‘ph’.

Speak to Spell removes the need for phonological awareness, knowledge of letter names, and the ability to write and type. If the word can be spoken, it can be written – without the pressure of handwriting or typing or already knowing how to spell. The user then sees the correct spelling of any word.

Speak to Spell, when used as a prequel to Speak to Write, concentrates on single words and removes the requirement to write a phrase or sentence. Creating poems and other written text with a mixture of typing and speaking starts to come naturally as users develop spelling confidence through speaking words to the computer. Users can speak any word they choose and it is written in the English alphabet. One client wanted to speak only Maori words and was able to programme the Dragon software accordingly. Equally, schoolchildren can input Maori words and the system will reuse them when required.

‘Discrete speech presents words bimodally – both auditory and visual through the monitor.’(Higgins and Raskind 2000) The user becomes involved in speaking the word, reading the word and recognising the visual structure of the word.

Discrete speech always shows the correct spelling. With reading, it is possible to guess what a word is, but when writing, it is essential to create accurate spelling; i.e. all the letters must in the right order. Confirmation that the correct word has been chosen from the list can be provided by hitting a certain key which brings up a picture to go with the word, using software such as Symwriter – a symbol word processor.

The motor skills involved in handwriting and typing are complex and for some people form a barrier to producing written work. Our experience is that if we remove the need for fine motor skills with Speak to Spell, thereby increasing a user’s confidence in his/her ability to produce words, students will also start to gain confidence in handwriting and typing. One success leads to another.

People with a physical barrier to being able to write or type find speech recognition software invaluable. This physical barrier maybe lifelong or the result of illness or an accident. Sometimes the barrier is only temporary, for example a broken arm or a fatigue-related illness, and the software will only be used for the duration of the injury/fatigue.

If a child is in the early stages of learning to write and is having trouble with spelling or with handwriting, using Speak to Spell plus a keyboard enables them to be on a par with their peers. This leads to independence rather using a scribe.

Overall, the objective of Speak to Spell is to help clients grow in confidence and enable them to concentrate on writing, so that they are free to think about expressing deas rather than worrying about how to spell the words. With Speak to Spell, we find that spelling often improves even when this is not the prime focus.

A 14-year-old school student was identified as being gifted and unable to write text. He used discrete speech software with mind mapping, attending five one-hour training sessions. Within the first session he was able to write a short autobiography and progressed from there.

After training another student, Speaking Solutions went with him and his mother to his school, who accepted his way of presenting his work through mind mapping. He went on to win a scholarship to a private school and is now at university.

A Year 12 student had been put into a learning support class at a secondary school. He was writing at the level of a seven-year-old. Not surprisingly, he had no confidence but thankfully a teacher recognised that he had potential. The school asked us to carry out an assessment and trial, and then provide the software. William changed almost instantly into a confident young adult who played for his school’s First IV and decided to become a chef. What did he do with the speech recognition software? He started by speaking cookery words and expanded from there.

A young man in his late 20s who’d suffered a head injury that left him with unclear speech. He had also lost the ability to write and read. Over a period of three years he used the software to build up his word recognition and speaking confidence. The computer is non-judgemental if you cannot say a word the way everybody else does! He now talks confidently and sends texts and uses the internet, just like everybody else.

A business owner who had always been a non reader and writer but was very articulate. He felt very threatened when email became a major form of communication. As he did not have regular access to a secretary or personal assistant he had to find a way of communicating that was not full of typos. Discrete speech worked for him.

Typical experienced users of discrete speech will type all the words they are sure of and just use the software when unsure of the spelling.

How does one become an experienced user?

* Every person is different.
* Some people use Speak to Spell for the first time and a light goes on about how words work.
* A typical experience would be six supported sessions, followed by regular access to the software.
* When the software gives the support required, it is an instant match.
* It does not suit all people. However, we would then recommend other tools.

When is the right time for Speak to Spell?

Ideally, Speak to Spell should be introduced when people know that they are limiting their writing to words they can spell and /or they notice a loss of confidence. These include the non-achieving bully; students who will not do their homework; a person who is strong orally but weak in writing. He/she might already be a high achiever but is capable of more. In the past, school reports would have read: ‘Could do better if tried harder.

The most satisfactory outcome is a confident writer who now has well-developed strategies for dealing with spelling, which results in handwrite and type.

Working with Speaking Solutions on Speak to Spell is like going to driving school to learn how to use the tools. Once you are trained, using the software will become automatic and you will cruise through everyday life.